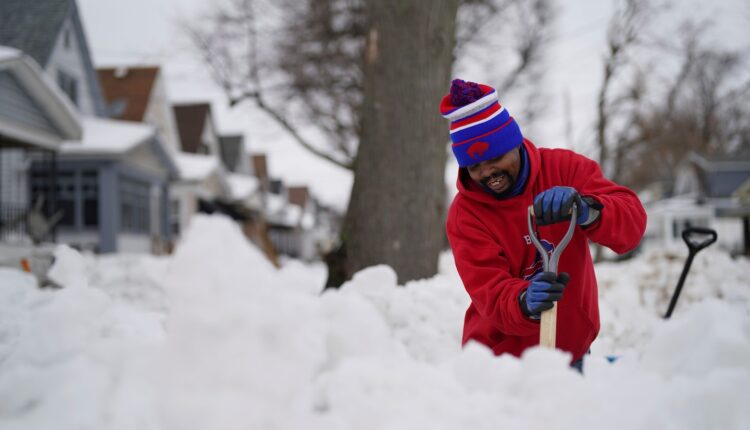 Pete Saunders is a Chicago-area urban planner and editor and editor of the Corner Side Yard blog.

Buffalo’s recent Christmas blizzard was one for the ages, dropping more than 50 inches of snow — and taking the city over 100 inches for the season, slightly more than its average annual total. Now, many Buffalo residents are rightly complaining about how unevenly the weather and snow has hit black and white residents.

Most tragically, blacks are overrepresented among the dead. Community leaders point out that Buffalo’s whiter neighborhoods and suburbs were better prepared for the weather. And after the storm, their streets were cleared of snow faster than those in the black neighborhoods.

This is hardly a new phenomenon. This is how structural racism works – some call it “racism without racists” –. In many cities, patterns established from bygone days of virulent interpersonal racism are embedded in the infrastructure and are most evident in times of crisis. Buffalo is only the most recent illustration.

The cities of the Great Lakes are as familiar with segregation as they are with snow. The region is well represented on lists of the most segregated cities in the country, especially when it comes to black and white segregation. Which city is the most separated? It does not matter. Sometimes it’s Detroit. Or Milwaukee. Or Chicago. Or Cleveland. Others in the wider region are no exception: St. Louis, Indianapolis, Cincinnati, Minneapolis and, yes, Buffalo. All have disturbing legacies of segregation. And everyone suffers economically.

This is rooted in the arrival of black Southerners to Northern cities in the early 20th century – fleeing Jim Crow violence and seeking manufacturing jobs – and efforts by white city leaders to keep distance between the migrants and themselves to accomplish. For decades, a series of policies—including restrictive deed agreements, no-zone zones, redlining, blockbusting, public housing, and interstate highway development—created a highly segregated region.

Of course, the Rust Belt isn’t the only part of the United States with separate black and white neighborhoods. Crises have exposed similar inequalities in the South and West — for example, Houston’s uneven recovery from Hurricane Harvey and the decades-long water crisis in Jackson, Mississippi.

Of course, racism in city maps and unequal treatment cannot be reversed overnight. But a first step is to acknowledge its impact and see that it has political consequences.

Consider what happened in Chicago almost 44 years ago. In January 1979, the city was hit by a series of snowstorms, and by the end of the month a record 47 inches of snow lay on the ground, which quickly turned to compacted ice and crippled the city’s transportation system. Snow accumulated on the tracks caused trains to fail, making operations infrequent at best. The Dan Ryan Line (now the Red Line), a major artery for the city’s South Side, was particularly hard hit. At the time, the Dan Ryan Line was connected to the Lake Street Line (now the Green Line), which serves the city’s West Side. The two lines connected Chicago’s largest black communities to downtown.

The Chicago Transit Authority, striving to clear snow from the tracks, established a temporary express service on the Lake-Dan Ryan combination for three days. The move made sense: shutting down the entire system for just one day would mean a drastic loss of revenue. But Mayor Michael Bilandic didn’t think about how South and West Side residents would view it. For three days, black Chicagoans watched trains full of whites zoom by on a direct trip from the 95th Street or Harlem Avenue terminals to the Loop.

In late February, they took their anger to the polls, rallying behind candidate Jane Byrne in the mayoral election and ousting Bilandic from office. It can be argued that the movement that eventually elected Harold Washington as Chicago’s first black mayor in 1983 began with the snowstorms of 1979.

Unequal support for black and white quarters is clearly not Buffalo’s problem. Nor can it be solved simply by electing black leaders. Buffalo has had a black mayor, Byron Brown, since 2006. Black voters have long learned that solving a systemic problem takes far more than just changing offices.

Eliminating structural racism requires individual acknowledgment of its impact, a profound and society-wide shift in thinking about urban planning, and leaders who can steer their cities towards equity and inclusion.

5 star center with ‘cuse offer has top 3 to decide