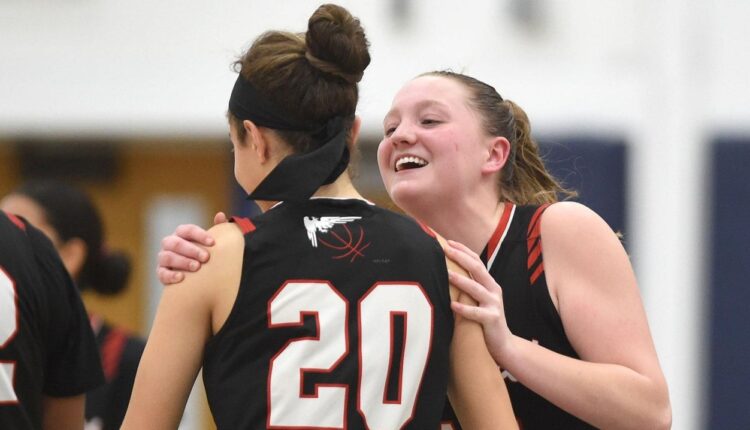 The Half Hollow Hills East girls basketball team is heading into the playoffs, and among other happy feelings, Jolie Boyle and Rose Azmoudeh are proud.

The two Thunderbirds, who joined coach Adam Cirnigliaro’s team in the ninth and eighth grades respectively, recall sitting back and watching older players lead the team.

Boyle and Azmoudeh, now a senior and a junior, were the leaders for Half Hollow Hills East (9-5, 9-7) at Louis D Giani High School in Huntington on Wednesday night.

Azmoudeh scored a game-high eight points and Boyle scored six to lead the Thunderbirds to a 32-24 win over Huntington (3-9, 5-10) and a playoff berth in Suffolk I.

“Some games don’t go our way, but we prevailed and we’re both very proud of our team,” Boyle said. “Especially Rose. I’m proud of Rose.”

“I’m proud of Jolie,” Azmoudeh added with a smile.

Huntington scored the first seven points and led 10-4 after the first quarter. But Half Hollow Hills East limited the Blue Devils to three points in the second quarter and built a solid lead after a 12-0 run.

The two schools combined for 37 free throws. Half Hollow Hills East hit eight of his 14 foul shots. Huntington hit six of 23 shots from the free-throw line.

“It was a very physical game but I thought my girls responded well to it and overcame a lot of adversity today,” said Cirnigliaro. “At the beginning of the season, the goal is always to win [a playoff spot] and hopefully we can build on that and move on from here.”

Half Hollow Hills East maintained its first lead at 1:34 in the second quarter and didn’t give up the advantage. Still, Huntington, led by Kaylee Smalling’s six points on two three-pointers, forced the Thunderbirds to hit their late shots.

However, the Thunderbirds persevered. Earlier this month, Half Hollow Hills East lost to Central Islip after leading by seven points early in the fourth quarter.

“I think that’s important for us,” Cirnigliaro said of holding off Huntington on Wednesday. “I feel like we learned from that [the Central Islip game].”

For Boyle and Azmoudeh, Wednesday night’s win and the 2022/23 season were about their teammates. Past and present.

“We want to do this for the previous teams that worked so hard for this every day,” Boyle said. “We just want to make them proud and show everyone we’re not done yet.”

Conn. teacher among 5 finalists for 2023 National Teacher of the Year