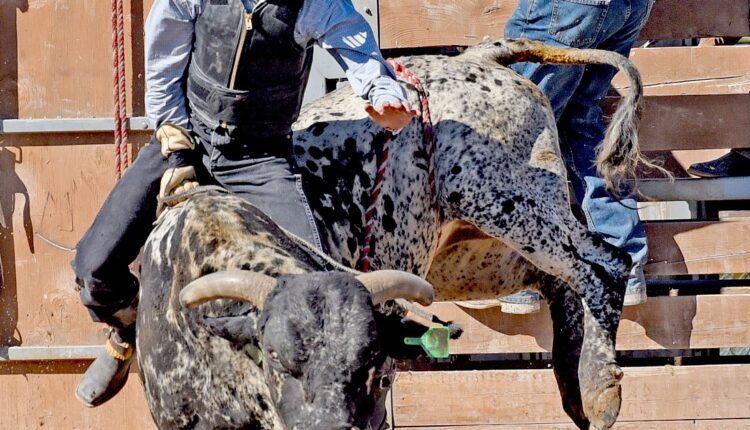 RONAN — After the first five thrill-seeking riders were launched into the air and face planted into the dirt mere seconds into their rides, the last rider of the day, Noah Henningsen, rode the longest, which earned him first place during Sunday’s wild buffalo ride with a time of 6.5 seconds.

A broncs and bulls only event kicked off the rodeo action on Friday evening.

On Sunday, the open rodeo drew spectators eager to witness the wild and always unpredictable buffalo ride where six adventurous crowd members risked life and limb for a little bragging rights and cash as a wild buffalo tries violently to unseat the rider off their back.

The cowboys had tough luck in the bull-riding event with only two qualified rides: a 72-point effort by Kyler McDonald of Ronan took top spot.

Former Mission Valley resident, Levi Guenzler took first place in the steer wrestling with a time of 9.40 seconds, while in calf roping Will Powell of St. Ignatius placed second and Koy McAllister of Ronan finished third.

Ronan cowboy Tate Wayman won a pot of cash in the ranch bronc event with an 80-point ride followed by Shea Miller of Arlee with a 76-point ride.

A time of 6.29 seconds by team roping duo of Dustin Datisman and Josh Harris won the team roping event. Chance Paradis and Colt Stonehocker finished second with a time of 7.73 seconds, while Dallas and Chip VonHeeder placed third.