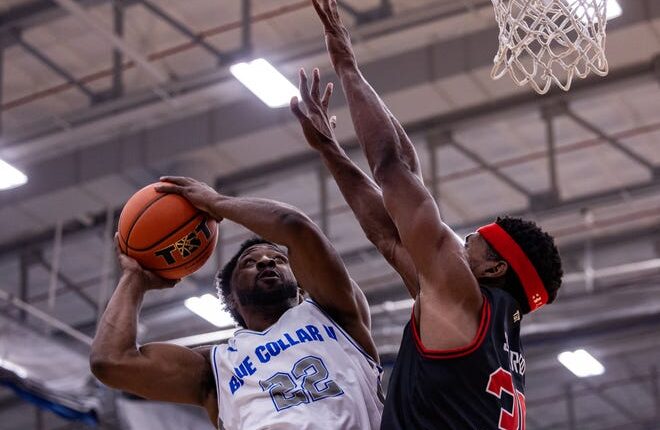 Moments after Blue Collar U won The Basketball Tournament’s Syracuse regional at SRC Arena, Caruthers joined his fellow former University at Buffalo players in reciting the Lord’s Prayer, all circled over their blue and white jerseys, which memorialized the 10 victims who died during the racially- Motivated Tops shooting in Buffalo.

Talley, remembered as a “beautiful soul” who loved cooking, was 62 when she died during the tragic May 14 mass killing.

“I’m glad to be out there playing for you,” said Caruthers, who averaged over 28 points as an East High senior under coach Darrell Barley.

“We’re really out here doing it for the city of Buffalo … trying to bring something positive to it,” Caruthers said. “It was really hard to hear it. To be from Rochester, an hour away, it was scary.”

After BCU’s semifinal appearance during its 2021 TBT debut, this year’s Caruthers-led squad filled by UB alumni is now three wins away from claiming the coveted $1 million grand prize.

“Being able to honor the 10 people that lost their lives at Tops on national television, and represent the city of Buffalo — a city that means so much to these guys — it’s just an unbelievable opportunity, and a way to give back,” said Bryan Hodgson, BCU’s general manager and University of Alabama’s assistant coach who coached at UB prior.

‘He got us going’

With about 30 seconds left in the first quarter, the 6-foot-2 Caruthers grabbed a long defensive rebound by half court, took two dribbles and elevated above Kyle Casey for a jarring dunk.

His agile one-handed slam even surprised his teammates.

Caruther scored five of his seven points in the opening frame. His first basket was a 3-pointer. He finished 3-for-4 from the floor with two rebounds and a steal. Hamilton, who scored a game-high 15 points, called the dunk “big time.”

“He came out there hooping. Hit a little trey ball. Got him a little banger. I didn’t even know he was athletic like that, for real. He got us going,” Hamilton said.

“Dontay Caruthers, that’s our guy. That’s our anchor. We’re going to go as far as Dontay takes us for sure,” Hamilton said.

Caruthers didn’t have the only highlight-worthy reel. Clark’s four-point play that beat the third-quarter buzzer was No. 2 on the Sports Center Top 10, and he finished with 14 points. Massinburg had 13 points on three 3s. Hamilton’s third 3-pointer was the Elam Ending clincher.

What’s next for Blue Collar U

Blue Collar U will return to the TBT quarterfinals this weekend.

Caruthers and BCU will play Team Heartfire at the University of Dayton for a spot in the final four. The Laphonso Ellis-coached roster beat the LA Cheaters 86-72 in the New Mexico regional Thursday.

The Blue Collar U-Team Heartfire quarterfinal will be televised at 7 pm Friday on ESPN.

Semifinals are slated for Saturday with the $1 million TBT championship game set for Tuesday, Aug. 2