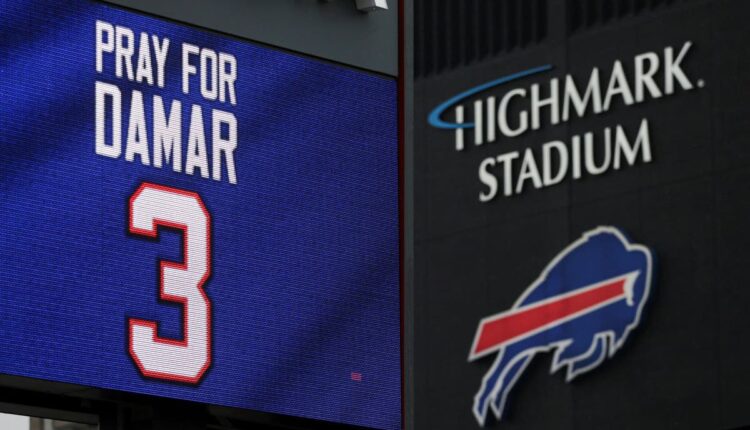 NFL player Damar Hamlin has “shown remarkable improvement” over the past 24 hours and appears to be “neurologically intact” as the Buffalo Bills star continues to recover from on-field cardiac arrest.

Doctors at the University of Cincinnati Medical Center said the 24-year-old was “seriously ill” in the hospital but woke up Wednesday night and was able to send written notices asking who won the Bills’ game against the Cincinnati Bengals.

In a press conference on Thursday, Dr. Tim Pritts: “Last night he could show up, follow orders and even ask who won the game. When we answered Damar when he asked who won the game, we said, “Yes, you won. You won the game of life.’”

Earlier, Hamlin’s agent Ronald Butler told The Associated Press that Hamlin was awake and able to grab the hands of family members by his hospital bed.

A Buffalo Bills statement said: “According to the physicians attending to Damar Hamlin at the University of Cincinnati Medical Center, Damar has shown remarkable improvement over the past 24 hours. While still seriously ill, he has shown that he appears to be neurologically intact. His lungs continue to heal and he’s making steady progress. We are grateful for the love and support we have received.”

Hamlin’s family have thanked the fans and praised the work of the medical staff, the support from the Bengals and coach Zac Taylor. “We are deeply moved by the prayers, kind words and donations from fans across the country,” it said in a statement Tuesday.

Damar Hamlin at the latest

EXPLAINER: What happened to Damar Hamlin, the NFL player who collapsed on the field?

If you missed any of Damar Hamlin’s news – here’s our explainer to bring you up to date.

Andy Gorel: The Damar Hamlin incident is a sobering memory for all of us

The air that had come over Paycor Stadium in Cincinnati was eerie. Players, fans and coaches on both sides were completely and deeply disturbed by what they had just witnessed. But somehow word got around that the NFL had notified the parties involved that play would resume in five minutes.

Shortly thereafter, game operations were announced as “temporarily suspended” until further notice. By now an update had been doing the rounds online that Hamlin had a pulse but couldn’t breathe on his own.

Confusion, devastation, panic – all these emotions visibly plagued the players and coaches as they stayed on the field, paced, conversed and even prayed in response to what they were seeing. No word was given about the injury in official broadcasts.

As we as a society coped with the trauma of watching a perfectly fit and healthy 24-year-old fall to the ground in complete spontaneity, conversations online swirled. From raising suspicions of vaccine-related conditions to recalling similar episodes of cardiac arrest in professional sports from years past, Monday night’s incident had nearly all viewers agree on one thing – the game should not go ahead.

Andy Gorel talks about how we felt after Monday night’s incident:

Andrew Buncombe: All of us who follow this brutal – but exciting – sport are responsible for what happened to Damar Hamlin

After the 24-year-old Buffalo Bills’ Damar Hamlin makes the rattling tackle, he quickly gets to his feet. He seems to be fine. But after two steps, he collapses, falls onto the field and cannot move.

We know that medical personnel rushing onto the field had to restart the player’s heart before he was evacuated by ambulance and taken to the hospital while players for both the Bills and Cincinnati Bengals sat or prayed in utter despair.

The young man is said to be in critical condition at the University of Cincinnati Medical Center, where he has been sedated and is undergoing “further testing and treatment.”

There was a flood of emotional messages of support from fans and players wishing Hamlin a speedy recovery, not least from Tee Higgins, the Bengals player he clashed with. “I pray you make it through, brother. Love,” he wrote on Twitter.

But is it? Is this all that’s gonna happen? Is this the only soul-searching that will take place after the intervention of the two coaches after this game, which is said to have been canceled only after the accident?

Hamlin’s agent Ira Turner has commented on the situation and the “emotional roller coaster ride” he’s been going through in recent days.

“Damar’s mum hit me, texted me this morning and told me everything, and it made me feel even more at home. I really appreciate them, I only hear from them and they have my back too. So yes, feels good.”

“For Damar to go through that and come out the other side, still thinking about his teammates, that’s Damar, that’s him,” the Buffalo Bills quarterback told reporters Thursday.

“For Damar to go through that and come out the other side, still thinking about his teammates, that’s Damar, that’s him.”

Bill’s coach greets the trainer who performed CPR on Hamlin

“The courage it took… You speak of a real leader, a real hero who saved Damar’s life. I just admire his strength,” McDermott said Thursday.

The Tampa Bay Buccaneers quarterback contributed $10,000 to the total, which has now surpassed $7 million and aims to support a toy drive for Hamlin’s community.

Brady was also supported by a number of NFL owners, with Jim Irsay and the Indianapolis Colts making the largest donation at $25,003.

Many have added $3 to their totals in recognition of Hamlin’s jersey number with the Buffalo Bills.

“So inspired to hear the story of Damar Hamlin, who was able to communicate in writing and wrote to the doctors, ‘Did we win?’ And they respond with, ‘Yes, you won the game of life. “Man it touches my soul that now while he’s recovering he’s feeling all the love and mana that was sent to him,” the Hollywood star tweeted Thursday.

So inspired to hear the story of Damar Hamlin, who was able to communicate in writing and wrote to the doctors, “Did we win?”
And they respond with, “Yes, you won the game of life.”
Man, it touches my soul that now, while he’s recovering, he’s feeling all the love and mana that was sent to him. ❤️💪🏾

“An update we were all hoping for, the team tweeted on Thursday after doctors announced Damar Hamlin was unable to communicate with them.

An update we were all hoping for. ❤️💙

Become a New York State Fellow and earn $85,000 while you train; Here’s who qualifies