Buffalo Sabers will have a hot start in October 2022 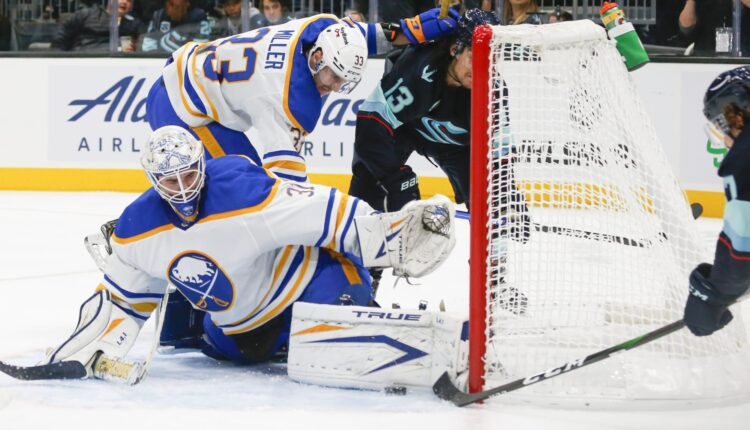 Looking at the Buffalo Sabers schedule, I decided to do a record prediction for each month. The month of October is first up.

It’s August. Free agency is pretty quiet and training camps will be opening up next month in the NHL. With nothing really going on around the league, I thought I would change it up a bit. During the next few days, Sion and myself will be looking at the Buffalo Sabers schedule and do a record prediction for each month.

First up, the month of October. Buffalo will be playing 9 games to open the first month of the season. The Sabers will be taking on the following teams in that span: Ottawa Senators, Florida Panthers, Edmonton Oilers, Calgary Flames, Vancouver Canucks, Seattle Kraken, Montreal Canadiens, Chicago Blackhawks, and the Detroit Red Wings in that order.

To open up their 2022-2023 season, the Buffalo Sabers will be hosting the Ottawa Senators.

Ottawa got a lot better in the offseason and will be a much better team this year. With that being said, I do think Buffalo will prevail in this one. After the Senators leave town, the Florida Panthers will make their way into Buffalo.

The Sabers will be taking their first loss of the season in this one. With the addition of Matthew Tkachuk, the Panthers are even better than last season. Based on recent success or lack thereof, Florida swept Buffalo last season.

Enter the first road trip of the season

After hosting the first two games of the season at home, the team will head out for a 4 game road trip. The Sabers will be taking on the teams of Western Canada for the first 3 games. Up first, Connor McDavid and the Edmonton Oilers.

Buffalo will lose this game as well but either in overtime or a shootout. If the Sabers can hold off a powerful offense but get to whoever is in net, then they can hang with the Oilers and maybe sneak out a win.

The Sabers will be heading to Calgary for a meeting with the Flames next. I can see the Sabers winning this one especially with the kind of offseason the Flames had.

To wrap up the Canada part of the trip, Buffalo will be going to Vancouver. The Canucks are a question mark team to me which means I do see the Sabers winning this one.

Last season’s expansion franchise swept the Sabers. This season, Buffalo will win at least one game against the Kraken and they’ll be leaving Seattle with the W.

After a week long road trip, Buffalo will finish the month of October with 3 games at home. Coming to Buffalo first, the Montreal Canadiens. Ever since Martin St. Louis took over as the bench boss for the Habs, Montreal was better. They are still in a rebuilding phase and I see the Sabers winning this one.

Hometown boy Patrick Kane and the Chicago Blackhawks will be coming to town after Montreal. Just like the Canadiens, Chicago is in a rebuild phase which is why the Sabers could win this game as well.

To close the month of October, the Detroit Red Wings will be the last team Buffalo faces in the opening month of the season. Just like the Sabers last season, the Red Wings improved despite having a losing record. I predict the Sabers closing October out with a win but this one will be in overtime or a shootout.

As you can see, I have the Sabers going 7-1-1 in the month of October. Am I being too confident? I don’t think so. They have winnable games in October. As Buffalo fans have seen the last few years, the Sabers have gotten off to strong starts but went downhill after.

Obviously these are just predictions and we’re still a couple of months away from seeing actual results. This article might not mean anything when it’s time to play hockey but on paper, I think the Buffalo Sabers will have a good month of October.