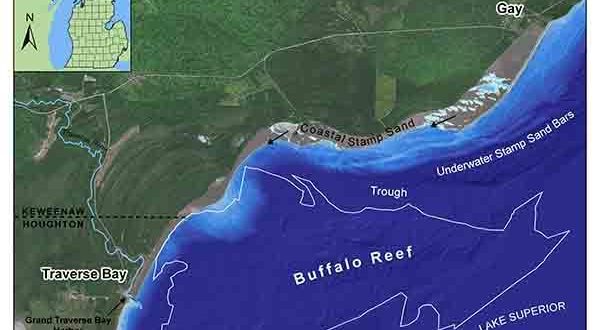 The Task Force has been researching how the invaluable game fish spawning area can be protected from the mine tailings piled on the beach at Gay, that have been washing into Lake Superior for more than a century. As much as 90 percent of the 2,200-acre reef has already been affected.

The group is recommending that the sands still piled along the beach be relocated to a 240-acre landfill that would be created on a hilltop west of Gay. Massive dredging of the sands already in the lake would continue, with the recovered tailings also added to the new landfill.

Beaches south of the stamp sand piles that have turned gray over the years would also be restored.

While the remediation expense is high, the cost of losing the spawning ground that produces many of the lake’s whitefish and lake trout could be even higher.

There’s no indication as to whence the money will come.

The Task Force will review the most recent public comments on the plan, and issue a final report in October.