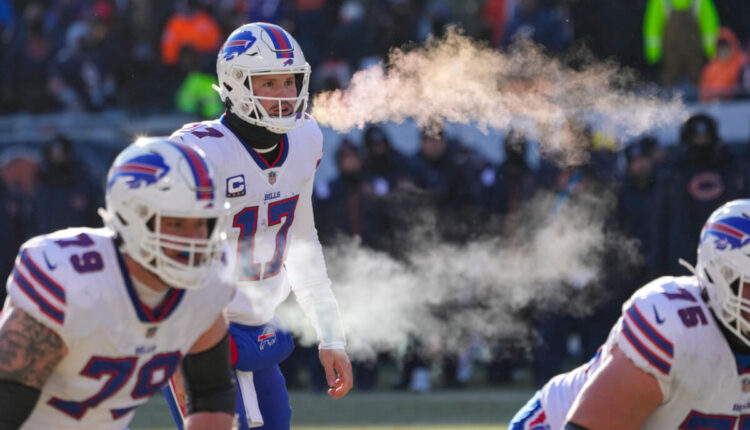 The Buffalo Bills and Cincinnati Bengals will battle it out for top spot in the AFC Playoffs when they meet on Monday Night Football.

Sports Betting in Ohio Begins January 1st! New users can sign up for great deals below! Oh only. 21+. Only new users and first bet. Must register with eligible promo code. The stake amount of the qualifying stake will only be refunded if the stake is settled as a loss. Maximum bet balance $1,500; must be used within 14 days of receipt.

Visit Caesars.com/promos for full terms. Void where prohibited. Know when to stop before you start.® Gambling Problem? Call 1-800-GAMBLER

Five keys to the game:

Who will win the MVP fight as well?

Though both Josh Allen and Joe Burrow have put together impressive seasons, it seems both men are falling short in the MVP race for Patrick Mahomes. Unless one of them can pull off something spectacular on Monday night.

It’s pretty clear from the stats that both signal callers are the driving force behind their teams’ respective successes, making the most important question of the game whether defense can slow either of them down.

For Buffalo, it means finding ways to put pressure on Burrow, who has the second-fastest release time in the NFL behind only Tom Brady. His quick throws mean the Bills’ defensive ends (sans Von Miller) have to win their one-on-ones right away to affect his throws. The Bengals lost their right tackle La’el Collins to injured reserve this week, allowing Gregory Rousseau to open up to get into the backfield and use his long arms to disrupt Burrow’s initial reads.

Cincinnati will also look to attack an offensive line from Buffalo, which has played poorly for much of the season. The Bills will get center Mitch Morse back, which is a big boost, but the Bengals have been good at switching schemes and pressure strategies mid-game all season, requiring Allen and the offensive line to adjust to come out on top .

Will the Bills shift their offensive line?

The return of Mitch Morse also raises questions about what Buffalo will do with its offensive line. Without Morse, Ryan Bates served as the team’s center while Greg Van Roten slipped into the starting lineup as right guard. The easiest fix is ​​to get Bates back to guard while Morse is back in the lineup, but is that the right move?

Ike Boettger returned from injured reserve last week but only played six snaps as he continues to return to game form. With another full week of practice under their belt, the Bills could feel comfortable bringing the guard back into the lineup. Considering Rodger Saffold has had a rough year as a left guard and has been a total drain at times in recent weeks, could we see Buffalo make a change or start splitting snaps?

Finding the right offensive line combination will be crucial in the playoffs.

Can Buffalo Diggs include?

It’s been a quiet few weeks for Stefon Diggs. Though he came into Monday night with 101 catches for 1,325 yards and touchdowns, the stud wide receiver just hasn’t been a factor lately.

He had no goals in the first half against the Bears and finished the game with two catches. Well, Buffalo didn’t need him to beat Chicago, but they will certainly need him to beat Cincinnati, and Josh Allen has been open about getting his best friend more involved.

An opportunity should arise Monday night as the Bengals struggled on the outside after losing their best cornerback, Chidobe Awuzie, for the season in October. Mike Evans and Chris Godwin each had 83 yards two weeks ago. Donovan Peoples-Jones had 114 yards the week before, but the Bengals have been fortunate to recently play against teams like the Patriots, Titans, Chiefs and Steelers who don’t have elite WR1s to pay outside with.

Diggs, Cincinnati can be an eyesore. It’s just up to Buffalo to make sure he is.

Can the Bills fix their CB2 situation enough to deal with the Bengals’ WRs?

On the other side of the ball, Buffalo’s secondary will certainly have their hands full with Cincinnati’s elite trio of wide receivers. The two biggest factors in deciding how to approach the challenge will be what to do with Tre’Davious White and who plays against him the most.

White has gained consistency since returning from his cruciate ligament injury, and Buffalo have been open to moving him in formation to take on the opposition’s best receiver. He was traveling with Jaylen Waddle against the Dolphins and Garrett Wilson against the Jets, so it’s possible he’s traveling with Ja’Marr Chase on Monday night.

However, Buffalo used White on Waddle so they could bracket Tyreek Hill with the rest of the secondary school. You could choose to harness Chase in the same way, using White against Tee Higgins, but the presence of Tyler Boyd would also complicate that strategy. That’s why it’s crucial that the Bills get a good performance out of their secondary cornerback.

Despite being outplayed by rookie Kaiir Elam against the Dolphins, Dane Jackson still played more snaps against the Bears last week, winning 59% to Elam’s 48%. It’s about time that changed. Jackson has been hit in pass coverage too many times this season and has displayed an inability to turn his head in time to play the ball. Elam has shown better ability to play with the ball and is the more physical corner. Both are necessary against these Bengals wide receivers.

Despite his inexperience, Elam has the qualities needed to help the Bills win this duel, but the team needs to trust him to pull it off.

Is there a Joe Brady influence?

An underestimated asset for Buffalo might be their own quarterback coach, Joe Brady. Brady is in his first season at Buffalo after being fired after two poor seasons as Carolina’s offensive coordinator. Prior to his time in Carolina, however, Brady was the passing game coordinator for an offensive run by the LSU Tigers led by Joe Burrow and Ja’Marr Chase.

Burrow made great strides on Brady’s passing offense, threw for 5,671 yards and 60 touchdowns just a year after he threw for 2,894 yards and 16 touchdowns. While some of this was simply Burrow’s natural progression and Cincinnati clearly follow a different pattern, Brady’s first-hand knowledge of how Burrow processes covers and cycles through his advances could help Buffalo’s defense confuse his former player.

Even if it only has an impact for a drive or two, it could make all the difference in a game that involves two high-profile attacks.

If you want to join in the fun of this game with some player props, Ethan walked you through some of his favorites for the game, so be sure to check them out.

For more coverage of the Bills, like this Monday Night Football preview, visit amNY Sports

Cincinnati Bengals quarterback Joe Burrow arrives during a warm up prior to an NFL football game between the Bengals and the New England Patriots on Saturday, December 24, 2022 in Foxborough, Mass. (AP Photo/Charles Krupa) to the pass.

14 people arrested for DWI in Suffolk, 13 in Nassau over Bank Holiday weekend