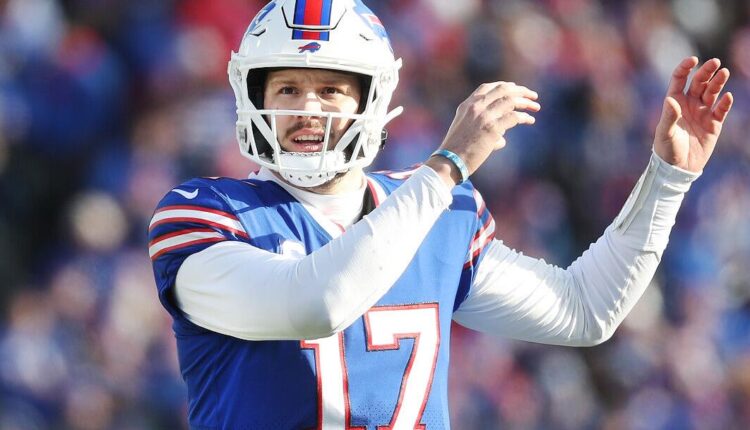 When quarterback Josh Allen rated the Buffalo Bills’ win on Sunday, he addressed the good guys collectively and the bad guys personally.

“I thought we did some good things today, but I did some bad things today,” Allen said. “So, there are things to clean up and some things we can learn from, but we will grow from it.”

Ryan O’Halloran: Buffalo Bills is good enough to beat Miami, but it won’t be enough next week

The Bills got away with a 34-31 win over the Miami Dolphins in an AFC wildcard game at Highmark Stadium on Sunday.

Allen threw for 352 yards and three touchdowns. He was 23 of 39. It was his third career playoff game with three passing touchdowns and 300+ yards, the most in Bills history. Jim Kelly had two.

However, Allen also threw two interceptions and lost a fumble, which the Dolphins returned for a touchdown on the Bills’ first game in the second half.

“The turnovers, they hurt us,” Allen said. “Really let them back into the game. 17-0 with chances and I give them the ball twice and give them a touchdown, those are just things you can’t do.

Both of Allen’s interceptions came in the second quarter. At halftime, Allen said the Bills were talking about settling down. Those talks immediately resumed when Allen was stripsacked by Dolphins safety Eric Rowe and Zach Sieler recovered the fumble for a 5-yard touchdown on the defensive end.

Just a minute into the second half, the Dolphins took the lead of the day for the first time after the turnover at 24-20.

“You can’t focus on that,” Allen said. “The play happened. you have to keep going I think having the lead on that offense, whether it’s Stef or Mitch or Dion or Rodger, just comes up to me and says, ‘Never mind, we have to go.’ And just understanding that you can’t let your last game dictate your next game.

“So you have to be better again in situations like this, but we were able to find a way.”

Left guard Rodger Saffold said even when bugs are widespread, they can’t be pinned on Allen.

“When you’re a quarterback, your mistakes are magnified,” Saffold said. “And my thing is that when you’re playing in a playoff game, mistakes don’t matter anymore: you play the hand you’re dealt. As long as the end result is a win, that’s all that matters.”

As a 13-year veteran, Saffold has seen times when players or coaches have not spoken too much to a quarterback on the touchline, hesitant that their advice might rock the quarterback. But Saffold said positive reinforcement is important during a game and crucial at that moment.

“I just wanted to make sure he knows we still need him badly,” Saffold said. “And that’s what I told him. Because when you have so much pressure on yourself, it’s easy to fall on the bad side and start doubting yourself. And that’s one thing I don’t want him to do.

“He’s a special player – (we) wouldn’t be here without him. He just has to keep understanding that, even if he makes mistakes.”

Testimony: The Buffalo Bills overcome many shaky moments to advance to the divisional round

But the dolphins also adapted.

“They started going into deeper cover zones and kind of limited us to staying in front of those safeguards,” said tight end Dawson Knox.

Allen saw the Miami defense do some things that effectively slowed the Bills down. The Dolphins combined for seven sacks and 13 quarterback hits.

“They played the pressman, they spied on me, they doubled for Stef, I thought their front did a pretty good job, maybe blocked some of the trajectories,” Allen said. “But again our boys found a way to win.”

Bill’s wide receiver Stefon Diggs had big plays early on. On the first two drives, he had four catches for 88 yards, including a 52-yard reception that put the Bills on the 6-yard line.

But the Dolphins’ defense eventually succeeded in minimizing Diggs.

After the first game of the second quarter, Diggs was already at 110 receiving yards. At halftime he was up for 114 yards and seven catches on eight goals. His receiving yards and catches stayed there, and he was only targeted once more in the second half.

As Diggs’ role shrank, other recipients made appearances.

“We have to do that,” receiver Cole Beasley said. “We have to be there for him, just give Josh easy throws. They will try to take Stef with them. He’s a great player. He’s our #1. If you give him one-on-one coverage, he’ll eat you alive. So if it’s our chance to take it, we have to do it.”

Beasley, Knox and Gabe Davis each caught a touchdown from Allen on Sunday. Knox had nearly a second recalled after the review, and Diggs also had what appeared to be a touchdown. The game has not been reviewed by Diggs.

Buffalo Bills wide receiver Cole Beasley speaks to reporters about his touchdown in the Bills’ 34-31 AFC wildcard win over the Miami Dolphins.

Knox’s first touchdown was a notable catch made possible by Allen’s unscheduled play.

“It was supposed to be some kind of quick punch where he punches me in the flat pretty quickly,” Knox said. “The D end peeled on me. I think Josh got some pressure, got him rolling out. Just another incredible game from him, put it where only I could get it.

Allen looked deep throughout the game and said it was to take advantage of what the Dolphins were showing. He had six completions of 20 yards or more, five where he threw deep and one that was just over center to Beasley, who had significant yards after the catch. Allen had three more completions for 15+ yards.

But one of Allen’s two interceptions came while he was searching intensely for John Brown. Allen incompletely threw another eight times while looking deep on Sunday, although one of those was a throwaway.

“If they didn’t want to play a safety high — they played a lot of clean sheets today, which we kind of expected,” Allen said. “I thought we had some good answers, some really good games and again some not so great ones to clean up and that’s weighing on my shoulders.”

While there are things to tweak, Allen and the Bills now have another week to do so.

“All that matters is surviving and moving forward,” Allen said. “No matter how we win, it matters if we win and I’m proud of our boys for playing the way they did.”