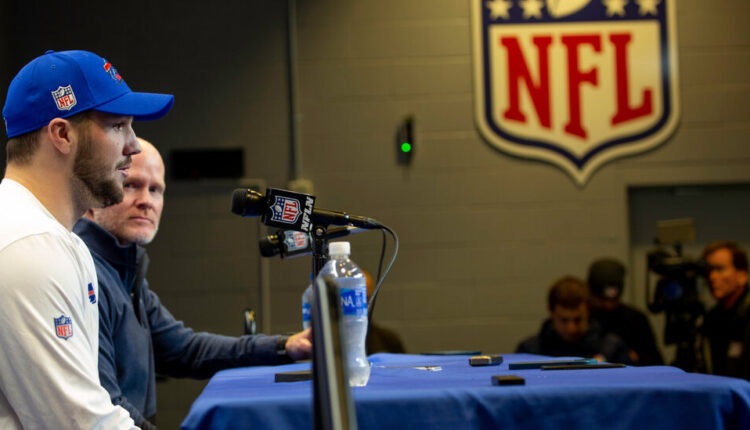 Bill’s safety Damar Hamlin had his breathing tube removed overnight and he has been able to speak to his family, doctors and teammates, the Buffalo Bills said Friday morning.

Hamlin spoke to teammates and coaches via video chat Friday as they met in preparation for a game Sunday against the New England Patriots. In a press conference with reporters, Bill’s coach Sean McDermott said he surprised the team with a “treat,” and the players gave Hamlin a standing ovation when they saw him on screen.

Hamlin later made a heart gesture with his hands, gave a thumbs-up and flexed his arm muscles, McDermott said, curling both biceps as he narrated the call.

Hamlin also spoke to the team, McDermott said, and had a simple message: “Love you guys.”

“It was a pretty cool exchange for a few seconds there,” McDermott said.

“He continues to make remarkable progress in his recovery,” the team said in a tweet, adding that his neurological function was intact.

Hamlin’s doctors at the University of Cincinnati Medical Center said Thursday that while Hamlin has shown improvement, it’s far too early to tell if he’ll be able to fully recover.

McDermott previously told reporters how Mario Hamlin, the father of Bill’s safety Damar Hamlin, reached out to the team in a video conference call from Cincinnati on Wednesday. Mario Hamlin and his wife Nina had been in a hospital with their son but wanted to give the team a message.

Damar, said Mario, would want the team to play.

Both McDermott and quarterback Josh Allen said Thursday afternoon that the message — combined with Damar Hamlin’s improving condition as he remains treated after suffering cardiac arrest in Monday’s game — was the boost the Bills needed to encourage them to even focusing on their work while continuing to pray and worry about their teammate and friend.

Hamlin, 24, collapsed after what appeared to be a routine tackle on Bengals receiver Tee Higgins during a game that was aired on ESPN’s “Monday Night Football.”

What followed was a harrowing 10 minutes with medics attending to him on the field and administering CPR while Bill’s players knelt in a circle around him. On the sidelines, players cried and hugged. Senders, shock evident in their voices, attempted to narrate the scene as Hamlin was eventually placed in an ambulance and taken to a hospital.

The game was stopped after McDermott consulted with that team, the officials and Bengal coach Zac Taylor. The league announced on Thursday evening that the game would not be completed.

“The team needs to refocus on the goals that they set out to do that Damar wanted,” said McDermott. “And that includes our game against New England this week.”

Both Allen and McDermott spent about 40 minutes answering questions from the news media, describing the horrifying scene and their efforts this week to process their emotions and prepare for a Sunday home football game against the New England Patriots, including coaches and players agreed seemed trivial compared to what happened with Hamlin.

“The scene just plays over and over in your head,” Allen said. “It’s hard to describe how I felt, how my teammates felt at the moment.”

But upon learning that Hamlin was texting and holding hands with loved ones just three days after nearly losing his life on the field, Allen said, “You couldn’t have said anything to shorten our day after.”

Allen said he and his teammates are looking forward to reuniting with Hamlin so they can “love him.”

McDermott, who has made the mental well-being of players a priority in his coaching style, said after the Bills returned from Cincinnati that there were impromptu team meetings and advisors for players and staff.

“Mental health is real,” McDermott said. “The health and well-being of your staff and your players is a coach’s #1 task in this situation.”

Allen said he invited all of his teammates to his home this week and those who joined him prayed and spent time together to relax and talk about Hamlin.

Bill’s cornerback Dane Jackson, who also played with Hamlin at the University of Pittsburgh, said the two men share a special bond. Before every game, Jackson said, he and Hamlin would typically find each other on the sidelines, where they would hug and tell each other, “I love you.”

It was a tradition Jackson thought of frequently after suffering a terrifying neck injury in Week 2 of this season. As he was loaded into an ambulance, one voice stood out among all his teammates, he said. It was Hamlin’s.

“He said, ‘I love you, D-Jack,'” Jackson said. He looks forward to seeing his friend again so he can share the same message.

Southwest Meltdown: What are you entitled to?