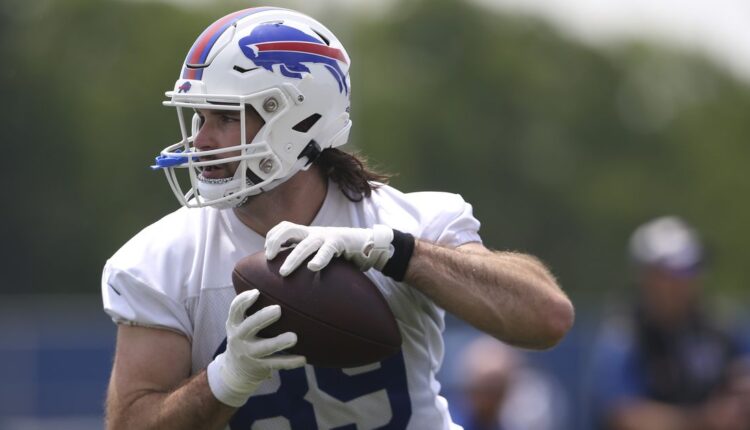 The Buffalo Bills have added two new names at tight end this offseason. Often, additions may not be viewed as roster locks, with some of the incumbent players considered to have an advantage based on time spent in the system.

The Bills, however, have a new offensive coordinator in Ken Dorsey, and while he may have spent the last three seasons in Orchard Park working as the quarterbacks coach (2019-2021) and passing game coordinator (2021), he’ll have the chance to mold the offense in his image. That means we can’t necessarily assume that the offense and its personnel will remain the same moving forward.

With that in mind, we bring you today’s edition of “90 players in 90 days,” where we discuss a tight end who has a big fight ahead for his roster spot.

Experience/Draft: 4; selected in the seventh round (No. 228 overall) of the 2019 NFL Draft by Buffalo

2021 recap: Sweeney made it back to the active roster last year after missing all of the 2020 season, first due to a foot injury and then myocarditis developed after a bout with COVID-19. Sweeney played in 13 games last season, making three starts. He was targeted 12 times in the passing game. He made nine catches for 44 yards and a touchdown. He also fumbled once. Sweeney played on just about the same percentage of snaps when he was active as he did when he was a rookie in 2019, appearing on 30% of the Bills’ offensive snaps in the 13 games he played. That was down from 31% in 2019. The touchdown, which came in Buffalo’s 34-31 loss at the Tennessee Titans in Week 6, was the first of his career.

Positional outlook: Sweeney joins Dawson Knox and Quintin Morris as the returning players at the position. OJ Howard and Jalen Wydermyer were added this offseason.

2022 off-season: Sweeney is healthy and has participated in all OTAs to date.

2022 season outlook: Last year, the Bills carried just two tight ends on the 53-man roster, and Sweeney was a healthy scratch multiple times on game days when the team decided to leave only Knox active. This year, Knox and Howard are essentially locked in to the 53-man roster, so Sweeney needs to prove that he is more valuable than a converted wideout in Morris or a high-production, limited athlete in Wydermyer. While I am confident that Sweeney is ahead of the former, I’m not sure that he’ll be able to beat out the latter.

That third tight end spot is going to be one of the more closely contested roster battles this summer, which is a tremendous indicator of just how good Buffalo’s roster is. I like Sweeney, but I think we’ve seen his ceiling, and while he may offer a high floor in terms of reliability, there’s no reason why Buffalo shouldn’t take a chance on the higher-upside player in Wydermyer. While Sweeney is more athletic, Wydermyer was consistently productive in the SEC, and he was named Second-Team All-SEC in all three of his college seasons. I’m giving the UDFA the edge here, albeit very slightly.